I grew up in Princeton, for heaven’s sake. I always have a wearable pair.

“Cree’s solution to socket saturation is gadgetization, which is itself a form of obsolescence, effectively shortening a product’s life span. [snip] Disposability was one of the ills L.E.D. technology was supposed to end.” The problem with CFLs (rather, many problems but I’ll point out the one most jarring) was color balance. You expected a light to respond as an incandescent would. Certain CFLs would turn reds a deep, rich black. It was bizarre. I hate to see LEDs go that route ON PURPOSE. Cree has been a good brand. I think they’re making a mistake.

NY Times: Can Women Be Trusted on Abortion? Two Men Weigh In.

“Mr. Pence’s demeanor on Tuesday may have been calm and friendly, but his record on reproductive rights is horrendous, and voters need to be aware of that.”

“Cybersecurity is mostly a defensive game, and it should remain that way. Encrypt everything possible. Disconnect critical infrastructure from the wider network wherever possible, and do everything to stop attackers from getting in, taking down, or mucking with systems.”

A fashion house is selling a brick for ... $30. Do a search, you’ll find many incredulous takes on this one.

TechDirt: J & J Warns Insulin Pump Owners They Could Be Killed By Hackers.

“Should the Trump candidacy fail, as now seems likely, those leaders stand ready to deny that the revolt ever happened. [snip] The solution for 2020? Bring back the professionals — and return to business as usual.” It’ll work only if the obverse doesn’t give the media more clickthroughs.

Authority Nutrition: 6 Reasons Why High-Fructose Corn Syrup Is Bad for You.

The lead-in is designed to bring in eyes. As you read, you’ll notice sugar is just as bad, and fruit is not. AN is trying to educate you to minimize all the sugars.

Nah, didn’t watch. I am interested in neither individual. Saw a highlight or two. VP candidates need bowties at these debates. Extra points if they were wifi and we could make them spin via using a hashtag on Twitter.

Deadline on the 10th.

Hackernoon: How it feels to learn Javascript in 2016

“I’m just going to move back to the backend. I just can’t handle these many changes and versions and editions and compilers and transpilers. The JavaScript community is insane if it thinks anyone can keep up with this.” HAHAHAHAHAHAHAHAHA ...

PS Mag: An Obamacare Exit in Minnesota Will Raise Premiums by at Least 50 Percent

“Now, Democratic politicians are advocating for one of the most controversial of the proposed Obamacare remedies — the public option, in which the government would up competition by offering its own insurance plan. Democratic presidential nominee Hillary Clinton began voicing her support for the public option in February, the New York Times reports.” My underlined emphasis. As I said previously, better start inoculating now, Hillary.

“There was a silence in the room after his statement, and people on social media were quick to express anger.”

Terrible. Big gems have a history, though. The Krupps (Elizabeth Taylor) experienced a similar situation.

“If China continues to cut its emissions, or even just keeps them at current levels, the country will be way ahead of its goal of peaking emissions by around 2030, which it laid out in 2014 and recommitted to during the Paris climate talks last December.” Well, that’s the positive news of today.

So, given the previous two posts ...

My weekend wasn’t wasted. And yet I spent most of my time looking, enjoying the scenery. I’d say northern NM is peaking all this week (barring rain to knock stuff down out of trees). The Santa Fe Ski Basin ... this week and next week both. But with Balloon Fiesta going, you’ll be better served to drive north and find other locales. The Ski Basin road is mobbed and unpleasant. The popularity of smartphones with cameras have just made everything worse. Last year I saw at least two runaway cars - people who so HAD to take a photo, they didn’t set the parking brake. Both ended safely within a couple of seconds. Still.

This photo went to ‘Popular’ on 500px in seven minutes. 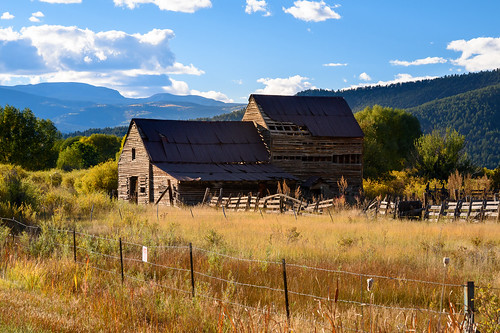 As frequent reader Jeremiah said on FB, “Puzzle shot.” And indeed, I may make this into a puzzle for some folks. From the drive up to northern NM over the weekend.

Bear spray wasn’t enough. A momma with two cubs. The folks at the Grizzly Center I visited in Montana said two cans during this season - one on your chest for immediate grab and one on your belt if one isn’t enough. This makes me seriously consider about some of the short pistols made for the purpose as a backup (if you even have time to think). 80 yards - and they can run FAST.

In These Times: The United States Isn’t an “Idiocracy.” It’s an Oligarchy.

“Life under Trump will look more like Mad Max than Idiocracy, and the only way to stop him might be to grow some empathy for the so-called idiots across the aisle and, together, punch up—not down.” A problem is, TV, cable and movies have been portraying dystopias as inevitable, even as attractive. Look at Burning Man; dystopia with services - and the elites’ status is maintained. All myth. Mad Max is pretty damned painful, if you lived it in reality.

Vox: The mind-blowing scale of Trump’s billion-dollar loss, in one tweet.

Downstream of remarkable news disclosures, there’s always frantic search for framing, for context. This is sort of like snorting rubbing alcohol.